Origin: Stefan Jakšić, Wolfgang Herzner, Verma Siddhartha (all AIT).
This pattern has been developed within the project IoT4CPS.

To consider: For basic threats, it should be known how likely they are, as well as how hazardous higher level threats can be.

Higher Attack State (HAS): All not BA-nodes in the AT.

Likelihood / Threat Level: Probability of occurance of a certain threat or attack.

Target System (TS): The CPS for which security risks shall be analyzed.

System Expert: Person that has sufficient knowledge about the TS for providing all relevant information to the →

Security Expert: Person who can identify all BAs relevant for the TS, and who knows how they interrelate in order to build the AT.

Target System Description: Information at sufficient detail about the TS that can be used by the experts for building the appropriate AT.

Higher Impacts: Impacts of higher nodes in the BA tree (that are known a priori).

Normalized AT: AT turned into disjunctive normal form (DNF).

Enriched AT: Normalized AT, annotated with basic threat levels and higher impacts.

AT with Likelihoods: Enriched AT with likelihoods computed for all nodes.

Risk Matrix: Matrix showing the risks of all attacks for all target system. components/items.

(1.a) Identify the BA that are principally possible for the given TS.

(1.b) Multiple attack scenarios are considered by combining BAs via ‘OR‘, ‘AND’, and ‘SAND’ (sequential AND) nodes, reflecting experts knowledge about their combinatorial characteristics.

(1.c) Multi-stage attacks are considered by iterating step 2, including new nodes, in a tree-like manner until a topmost attack threat is reached.

(4) Compute all likelihoods: For the higher level and multi-level attacks represented (HAS) by the non-leave nodes of the AT, their likelihoods are computed as follows:

(4.a) For OR nodes, the canonical form gives all attack paths to each state related with OR (disjunction) and we do the risk assessment for each attack paths individually. Note that the resulting risks are propagated separately to the next higher level.

(4.b) For AND nodes, likelihood is the minimum of all direct lover level nodes.

(4.c) For SAND nodes, compute likelihood as for AND nodes (i.e. do not consider the impact of sequential dependences on threat level). (The reachability score for following attacks can be taken as preceding attack, as this provides a gateway to the following attacks.)

(5) Evaluate risks (risk matrix): For each node, compute risk as product likelihood*impact. Represent the result in a matrix with all TS components on one axis, and all threats – basic as well as higher and multi – on the other.

Note on process flow: In principle, activities 2 and 3 can be executed in revers order. This is reflected in the structure diagram.

Benefits: Compared to other TARA-approaches (Threat Analysis and Risk Assessment), this approach enables consideration of multiple and multi-stage attacks in both qualitative or quantitative fashion.

Limitation: Without knowing likelihoods of BA and impacts of included multiple and multi-stage attacks, computing all attack risks is not possible.

This example shows the application to the threats listed in “Review of safety mechanism in vehicular ad-hoc networks” (Alexandria Engineering Journal (2015) 54, 1115–1126).

(1) The first version of the Attack Tree at right is drawn using www.draw.io (see figure below).

(2) For risk assessment, it is drawn with ADTool, see 2nd figure below.

(3) Then, Basic VBA scripts evaluate, for all higher attacks, which are the basic attack steps involved and how they are related using ‘AND’, ‘OR’, ‘SAND’ (3rd figure below).

(4) These scripts then evaluate the disjunctive normal form.

(5) Finally, for each attack path, the critical basic attack and its likelihood is evaluated, and the obtained risks shown in the risk matrix (last figure). 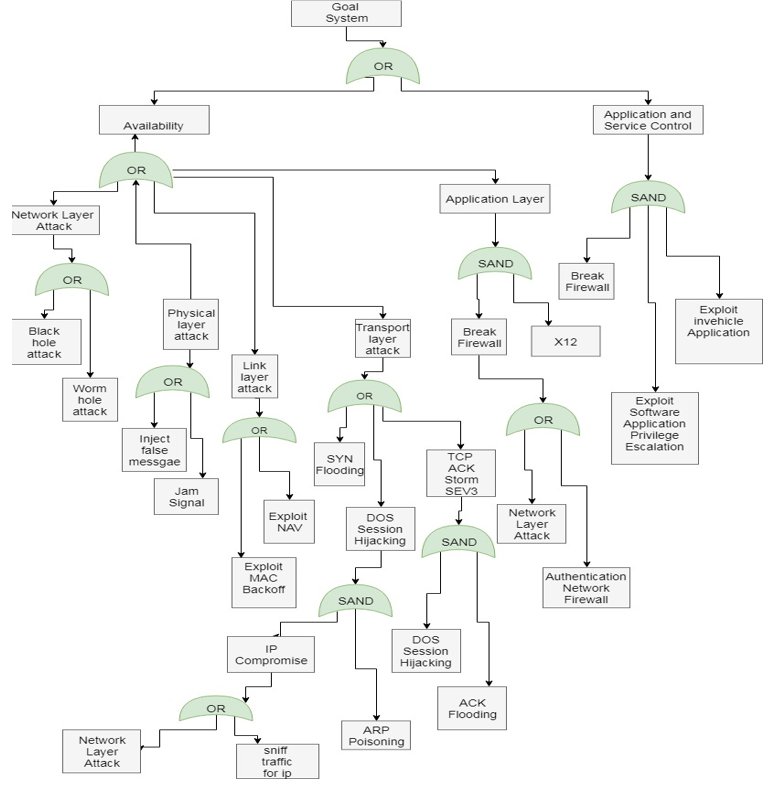 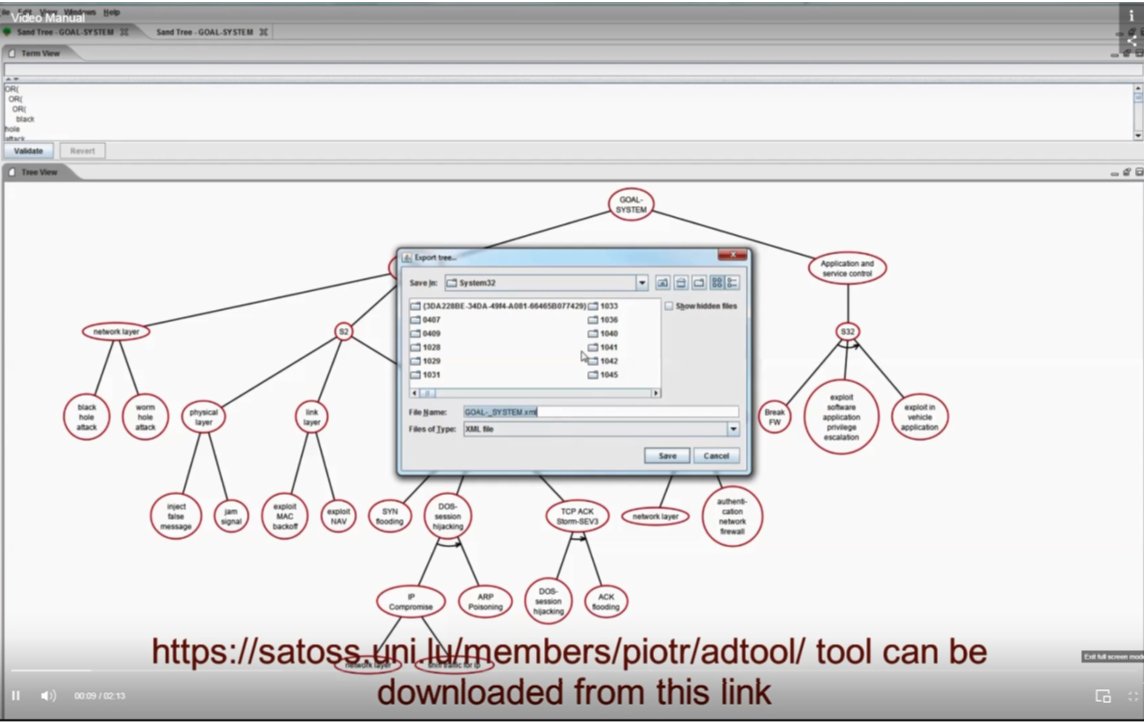 The AT obtained using ADTool 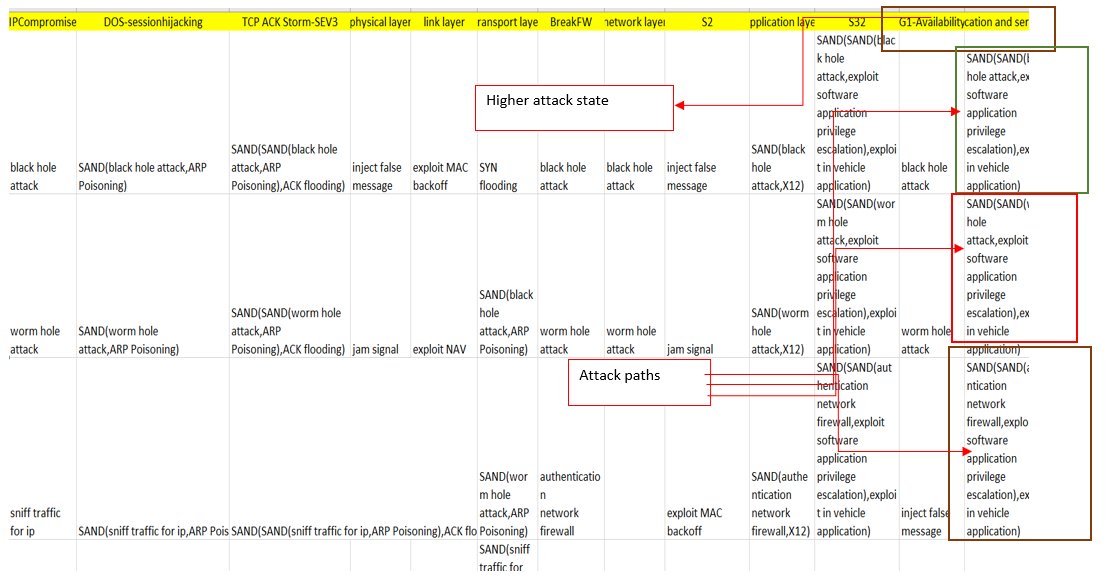