Context/Pre-Conditions: It should be possible to retrieve a trace/witness from the model-based analysis tool to create an executable test case from.

To consider: the code (developed or automatically generated) needs to be testable with respect to the assumptions and properties that are to be tested. This could be achieved, e.g., by following certain rules in implementing the system. For instance, in the context of the use-case where we have applied this pattern, the code is implemented/instrumented in a way that we can track states and transitions at runtime. 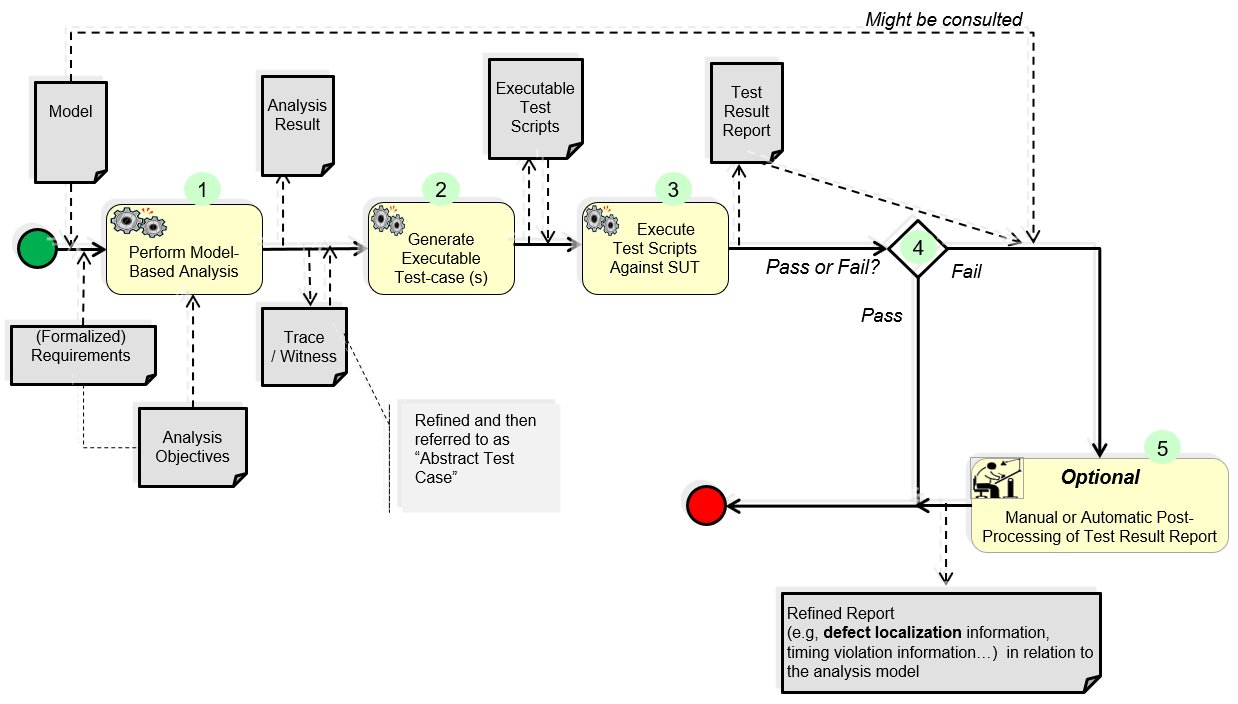 Analysis objectives: properties that have to be possessed by the test model. They are derived from requirements by the T&A model engineer and may be formalized, e.g. as TCTL properties.

(Some more information can be found under “Application Example“ from this perspective.)

(1) Using the test objectives, the system model is analysed, resulting in traces through the model that represent witness for fulfilment the requirements. These traces represent test cases, but in abstract notation, because they cannot be directly applied to the SUT.

(2) The test engineer turns these abstract test cases (automatically) into executable test cases, typically in form of test scripts, which can be understood by the test environment. This is mostly achieved by a rather straightforward notation transformation.

(3) The test engineer executes the test cases against the SUT, and records the test outcomes in the test reports.

(4) The test engineer evaluates whether tests are passed of failed, typically by comparing reports with the intended results (test oracles).

(5) For failed tests it can be appropriate to post-process the test report manually by the test engineer, in order to provide additional information such as suspected fault location, which were gathered during test result evaluation.

Implications: The pattern helps to check if the models and systems behaviour at runtime match or not. As a consequence:

– It would also be possible to get information about the vicinity of a problem and trace it back to related parts and elements in the model.

– More test cases can then be generated by TCG tools to target that part of the system in which a deviation from the expected behaviour is observed. In this case, collaboration with TCG tools can also be considered (not shown in the figure).

– This pattern seems to resemble “MBT with Test Model Analysis”. However, it uses model analysis for gaining test cases which assure conformance of SUT with test model rather than increasing trust into the test model itself. It further emphasizes difference between abstract test cases and concrete test cases (executable test cases) – in difference to “MBT”.

– For examples, how appropriate abstract test cases can be achieved, see the application example below.