– It depends on chosen modelling language/notation how easy and efficiently this pattern can be applied. 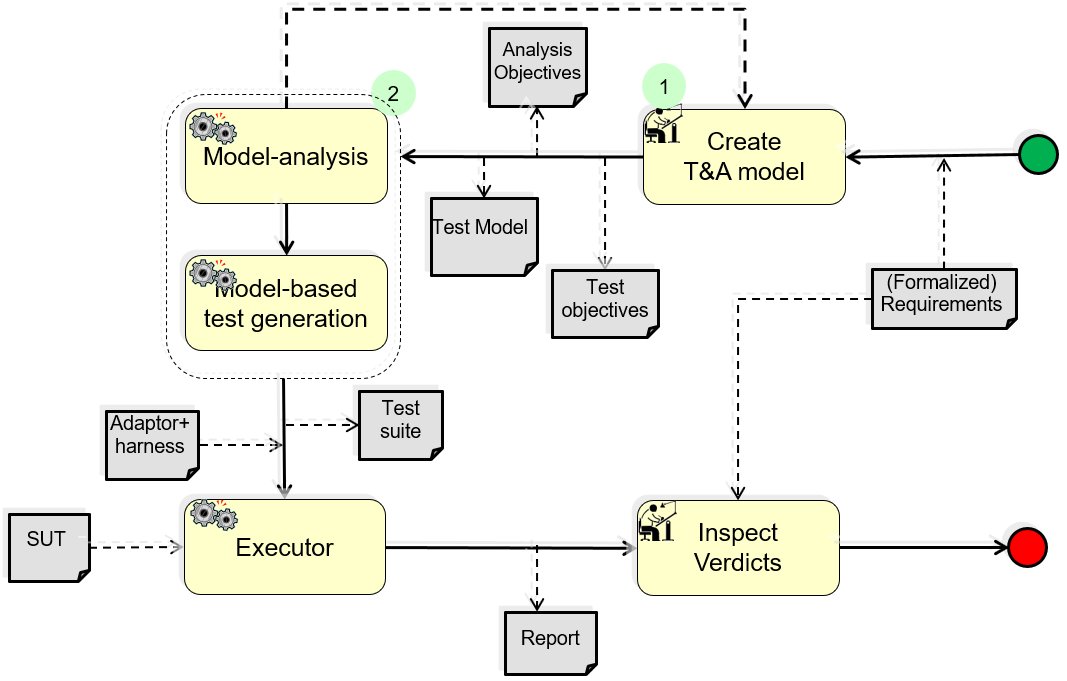 Only those are described here that operate in addition to those described in pattern ‘MBT’.

Analysis objectives: Properties that have to be possessed by the test model. They are derived from requirements by the T&A model engineer, and should be formulated such that they can be proven by model checking. Additional properties are generic checks like alle edges/locations reachable, abscense of deadlocks.

Only those are described here that operate in addition to those described in pattern ‘MBT’.

(1) The T&A model engineer defines the analysis objectives from the requirements, perhaps in cooperation with the customer.

(2) The model-analyser is usually a model checking process (controlled by a human expert) that examines the model whether it meets an objective or it find a counter example (path through the model) that violates the objective.

– if a test case fails it can (most likely) be assumed that the implementation is wrong,

– if a test case passes confidence is high that the implementation actually conforms to the requirements.

– Model checking is expensive with respect to memory and CPU time, and may fail for more complex test models.

– Of course, if model checking shows that the model violates an objective, it should be corrected. This is indicated by the dashed path in the structure diagram.

– The T&A model is checked for internal consistency with MoMuT::REQs.

– The T&A model, which was generated with UPPAAL, is verified against formal expressions entered by the verification engineer in order to validate this T&A model. Thereby also generic model properties like absence of deadlocks are analyzed.

Comments: Model analysis is based on model checking function of MaTelo, it doesn‘t examine whether the test models meets the analysis objectives. It checks only some points, namely:

– The “Invoke” and “Terminate” state number.

– No outgoing transitions on the “Terminate” state.

– No entering transition on the “Invoke” state.

– A state is not a destination of duplicated transitions.

– For each profile chosen in the model checking, test if the sum of probabilities at the transitions leaving a state equals 1.0.