Context/Pre-Conditions: A set of formalized requirements (correctly) expressed as properties that can be model-checked.

To consider: Requires high level of expertise, both when creating an abstract model, formulating properties and executing model-checkers, and refining the model based on test runs (CEGAR-principle) of counter-examples. 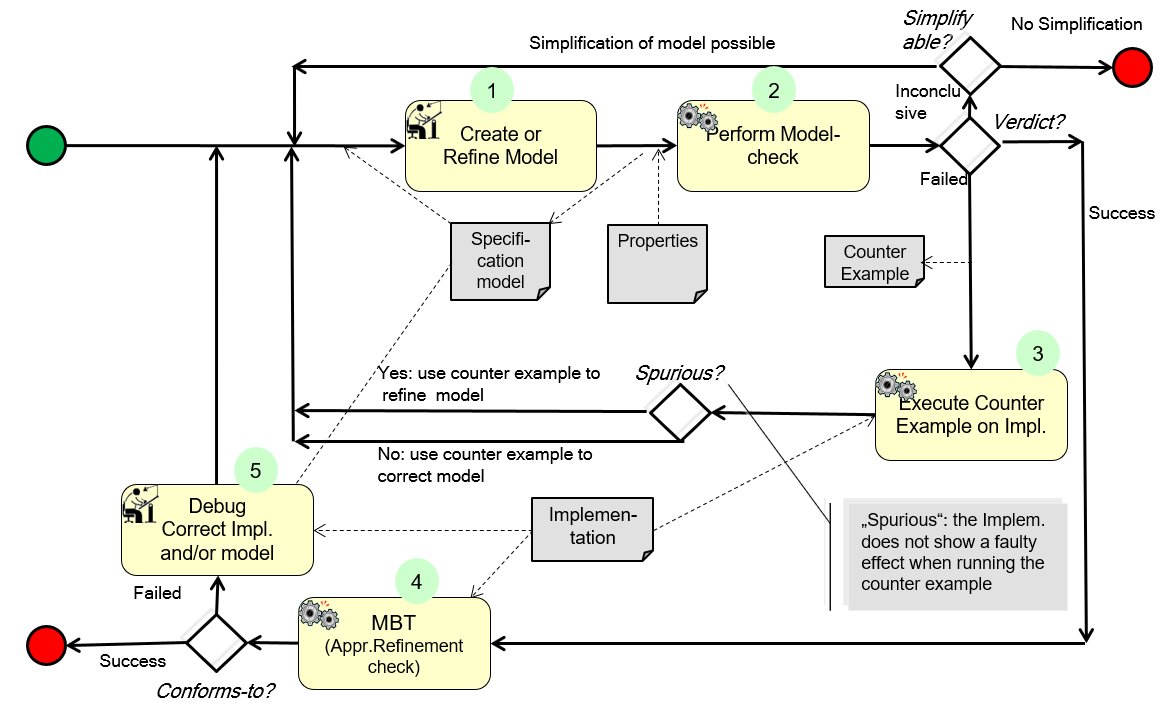 Model-checker: Tool that takes a model and a property, and checks whether it can verify the model or find a trace that violates the property. Such a trace is called “counter example”.

MBT: A procedure capable of determining (approximately) whether an implementation „conforms-to“ (e.g. trace inclusion) its specification model through testing.

Implementation: An executable system serving as the system under V&V.

Counter Example: A trace of the model generated by the model-checker exemplifying how the model may violate a given property; also called negative trace.

Witness: A trace in a model that verifies a property; also called positive trace.

(1) The engineer creates a first proposal for the model.

(2) He applies model-checking against a set of predefined formal properties, giving a verification status for each property, possibly with a counter example.

– If the result is as expected (Success for all properties), the model is assumed to be a valid/good.

– If the result is inconclusive for some properties, he may attempt to simplify the model (apply abstraction, make state-space smaller, or re-phrase properties).

– If the model has a trace that is not desirable (e.g. generated as counter example to a property that should not be satisfied), the model is wrong, and possibly the implementation.

– If the test shows that the trace is not in the implementation, then the model is too abstract, and the engineer needs to refine it.

– Else the model captures the wrong behaviour, and he should correct it – assisted by the counter-example.

(4) He applies MBT to check (by testing approximation) that the behavior of the implementation refines (in formal testing: conforms-to) its specification.

(5) If this is not the case he corrects the implementation (or the model, if the defect can be linked to a modelling error).

– The engineer is getting feedback from the implementation that helps him decide how to correct the model (CEGAR: Counter example guided abstraction refinement).

– Feedback from implementation helps the modeller.

MBT: The model consisting of formal requirements is refined because of new or changed customer requirements

Implementation: Model under test in Simulink

Specification model: The T&A model is updated according to the counter example