Purpose: Given the increasing complexity of safety-critical systems, it is more and more difficult to perform safety assessment required by standards. The following pattern presents how to perform a so called Model-Based Safety Ana­lysis (MBSA). Its results can be used for classical safety assessment techniques such as Fault Tree Analysis (FTA) and Failure Modes and Effect Analysis (FMEA).
The MBSA has two main prerequisites. First, the use of formal semantics to express the analyzed malfunctions as well as safety requirements. This allows to perform fault injection in the nominal system model and extending it to include the behavior in case of fault occurrences. Additionally, formal safety requirements can be translated into failure observers. Second, the underlying verification technique that analyzes whether the failure of the safety requirement can be observed in the extended system model. A typical result of a traditional safety analysis, that can be generated by the MBSA, is the minimal cut-sets (MCS) for a given safety requirement. Cut-sets are sets of fault combinations that cause the safety requirement to fail. Specifically, if any fault is removed from a minimal cut-set, the remaining set is no longer a cut-set.

To consider: Implementing this pattern requires the involvement of a safety engineer. Also, the execution of the MBSA might be fairly time and resources consuming. 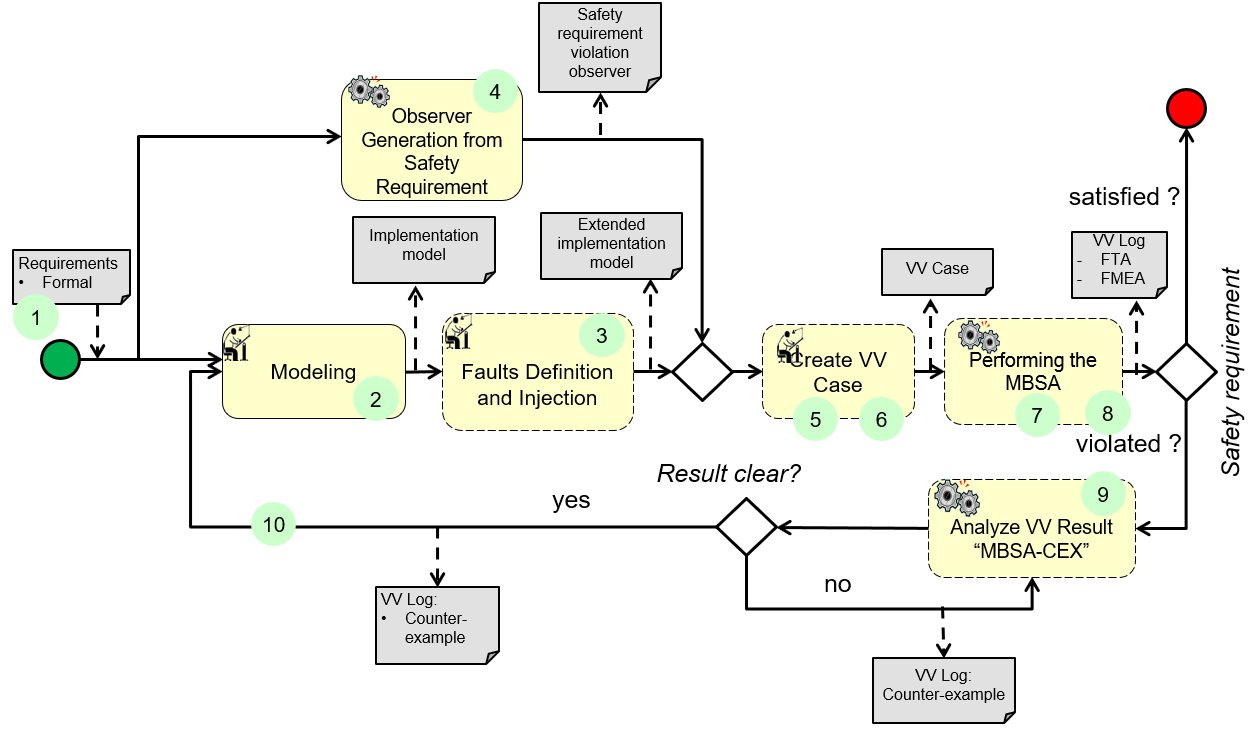 To keep diagram readable, not all inputs (artefacts) are shown here. They are displayed in the detailed diagrams below.

(4) A failure observer of the analyzed safety requirement(s) is generated. This observer automaton will be used later at the level of the analysis to monitor whether the system has reached a failure state.

(5) A safety analysis task is created and linked to the extended model and the failure observer.

(6) The type of the safety analysis task is chosen, which can be either FMEA or FTA.

(7) The model-based safety analysis is performed.

(8) Finally, either a fault tree or an FMEA table is generated depending on the type of the analysis chosen.

(9) The safety engineer assesses the results and the outcomes for safety requirements violation (caused by the injected failure-modes). He can run a counter example (CEX) analysis to obtain a trace that shows how the faults lead to the violation of the requirement.

(10) The system engineer will modify the design according to the analysis results by introducing additional safety mechanisms.

Benefit: The pattern reduces the manual analysis effort needed by the safety engineer in the case of a system update.

Limitation: The analysis might be time and resources consuming.

Comment: MCS can be used to automatically derive artifacts such as fault trees and FMEA tables. In some cases, the information contained in the generated safety artifacts is not trivial i.e. it is not clear how the occurrence of the malfunctions lead to the violation of the requirement. Accordingly, techniques such as model-checking can be used to generate a counter example (CEX) corresponding to a simulation run that shows clearly how the faults lead to a situation where the safety requirement is violated.

MBAT Automotive Use Case 3 (Adaptive Brake Light, by Daimler) / Scenario 03 (Is a state in the model reachable?):

The Model-based safety analysis is used in this scenario to assess whether a state where the safety requirement‘s violation occurs is reachable in the system model in case the injected faults are activated.